If you are a new client, let me know that you would like to connect by telehealth, rather than in-person, when I send your Welcome email. Thanks!

Would you like to switch to the accessible version of this site?

Don't need the accessible version of this site?

Are you a "codependent?" Do you care for someone too much? Are you 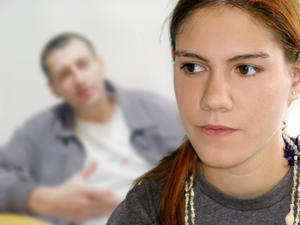 
Codependency is one of the current buzzwords of dysfunctionalism. It's been

around, actually, for several years, first, in the guise of "para-alcoholism" when it meant

something somewhat different than it does, today, then as "co-alcoholic," as you begin to get the picture of what it used to mean, and, today, seemingly, as any role, usually played by a woman, in a troubled relationship.


Codependents may still be considered as grown up children of alcoholics, grown up

abused children, or children reared in some sort of dysfunction. Simply, codependency is indicative of a person in a relationship whose life seems to be governed by the likes,

dislikes and whims of the other.


If the other is an active alcoholic or drug addict, violent, or sexually, emotionally or psychologically abusive, the codependent may be in dangerous and dire circumstances and it is in her or his best physical, emotional and child-rearing interests to

never start the relationship, get out to protect oneself and one’s children, and seek therapy in order to learn how to avoid entering such relationships.


Relationships are built on trust and commitment and the only trust and commitment you have is that you will be abused. It's extremely difficult to develop the trust that you won't be abused, again, once your partner has abused you. If this is the first time or the tenth time, the dynamics have been set in motion and you can count on it happening, again.


Whether it's the promise of an alcoholic, a drug addict, a batterer, a sexual abuser or a psychological tormenter, that it won't happen, again, it's a safe bet that it will.


Abuse, either self, other, or substance, is a dysfunctional way of relieving stress. The

perpetrator has learned that engaging in it relieves stress, it's cathartic, and it relaxes the perpetrator. The perpetrator is usually an otherwise mature adult. Unfortunately, the

perpetrator learned very early, as a child, that the abuse is an effective way of relieving

stress. Thus, the otherwise mature adult is relieving stress as a child would, with self and/or other-injurious behavior.

being unusual, or they may be naive', having grown up with a loving father (or mother),


While the codependent is seen by others as reacting to the abuser's behavior, the codependent is actually enabling the behavior of the abuser and getting her or his own control needs met. That's a nice theory but, unfortunately, when a relationship is abusive, it doesn't matter. What matters is the safety of the victim(s),

which is usually the physically weaker partner and/or family members.


Trust in a relationship takes time, in fact, many years as each person learns

more about him or herself and the other. When the trust is violated, in this case, with abuse, it's unusual for the trust to be regained.


Following the catharsis of the abuse, it's easy for the abuser to say it will never happen, again. When the stress peaks, again, though, is when new foundations of trust will begin to be built, if the stress is handled maturely and not

violently. That seems to rarely happen. Instead, the partner is lulled with false but well meaning promises until she is once again victimized.


Women are the natural nurturers of the human race. They're meant to give birth and

raise children for several years. It seems plausible that nurturing in human females is

biologically based, as it is in other species.


Like our winged friends, the birds, we all need our mothers until we're capable of leaving the nest. For humans, it takes several years to leave the nest. In ideal circumstances, we require many years of patient mothering. We go through good times and bad times until, finally, we're ready to leave.


For the most part, it's our mothers who have taught us and stood by us. Good mothers have lots of patience and special understanding. Is it any wonder then, that when a woman, a natural nurturer, finds herself in an unfulfilling, possibly abusive relationship, that she hangs in there, seemingly endlessly?


Maybe the word, "codependent" was coined by a man, since we men would

seem more likely to quickly leave a destructive relationship and we can't understand what would keep a woman in one.


There is little stigma attached to a man leaving his wife and children but, even in the enlightened 21 st Century, we don't expect women to leave their husbands and children. When they do, they're generally seen as having failed. In other words, we expect wives and mothers to hang in there almost at all costs. Then when they do, we call them "codependent."


So, if you realize you're in a codependent relationship, what do you do? It never

hurts to read about the topic. There are thousands of books on codependency.


Knowledge is power. It's also beneficial to attend a Codependent's Anonymous, Alanon, or Adult Children of Alcoholics meeting. All of these groups address the reasons why we're in codependent relationships and what we can do to get out of them.


Consulting a therapist for insight, support, and help in developing an effective plan of action quickly can save a lot of time, energy, emotional agonizing and turmoil. A therapist is also a link to rational thinking and planning when those around you may be giving you many mixed messages based upon what they (especially, your abusive spouse) "think" you should do and, which may not necessarily be in your best interests.


1. Do you place your partner's needs ahead of yours?

2. Have you ever hit or been hit by your partner, or been grabbed,

3. Does your partner tell you how to dress?

4. Is your partner critical of your ideas, thoughts, and feelings?

5. Is it difficult to express your true feelings to your partner?

6. Do you rely on your partner to make most of the decisions?

7. Do you keep silent in order to keep the peace?

8. Do you feel you give and give and get little in return?

9. Do you feel stuck in this relationship?

10. Do you feel that your relationship would fall apart without your

11. Do you have to control your emotions most of the time?